Fishing the FLW from the eyes of a co-angler, The Rod Glove Pro Staff, M J Deroche 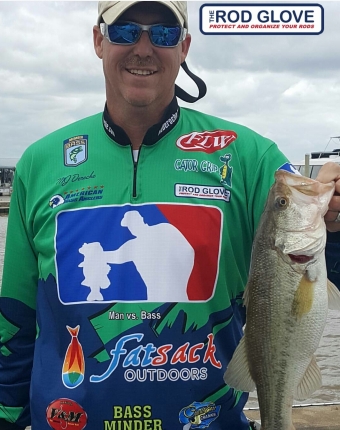 We recently caught up with The Rod Glove Pro Staff, M J Deroche, who was able to tell us what it's like to be a co-angler in the larger tournaments such as the Bassmaster Opens and FLW Costa series.

Many times when we think of competitive tournament angling, we automatically think of the angler, the one that owns the boat, the motor, the trailer and the electronics.  Most people assume that co-angler's are there because they don't have the knowledge and many times the co-angler's are overlooked.

Mike started fishing with his Dad, who was a full-time Firefighter, just like himself, and his Uncle when he was a little boy.  Growing up in Louisana there were many kids fishing derbies and tournaments in which he enjoyed the competitive side of fishing.  Just like his Father influenced his career, his Uncle influenced his fishing career as his Uncle had competed in the Top 150 Series.  Following in his footsteps, Mike decided in 2009 when the Bassmaster Opens came to his hometown to enter.  Although he did not place, he learnt a great deal and had fun.  He was so inspired from the event that he decided to start his own Saltwater Series as he enjoyed saltwater fishing.  Hours of hard work did not produce the event as that year was when the tragic BP Horizon blew up in the Gulf of Mexico off the coast of Louisiana and shut down the fishing industry.  MJ made the choice that day to get back to his roots of freshwater fishing and returned to the Bassmaster Opens.

been using The Rod Gloves for a number of years and says it makes it easier for him to carry his rods from his truck to the boat.  Once he gets to the boat, he take the Rod Gloves off, folds them in half and secures them together with The Rod Wrapz and keeps them in a container.

Whether it is a lake or river, there is a common piece of fish holding cover that lines the shorelines…