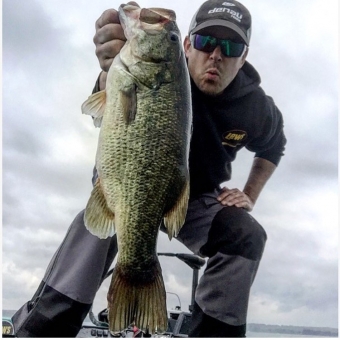 Now that the Toronto Fishing shows have concluded along with some recent retailer spring open houses, we look forward to bass season and the upcoming tournaments here in the North.  If you happened to stop by our retailers at the shows you may have met Matt Torlee during the show season, and you will know that he has a zest for fishing.

The Rod Glove recently caught up with Matt Torlee to find out a bit more about him and what he has in planned for the 2017 tournament season.

How did you get into fishing?  When did you learn?

I used to spend summers at my Aunt and Uncle's cottage on Lake Windigo in Northern Ontario. My Aunt was an avid angler and shared with me her passion for fishing. When I was old enough to take the boat out by myself - I would spend twelve hour days on the water and every night I would make my way back to the dock in the dark. Also, I was a city kid and spent a lot of time fishing the Thames River in London, Ontario. Needless to say, fishing became an obsession for me at a very young age.

What made you want to get into tournament angling?

I remember walking through a park with a friend of mine and coming across a Bassmania tournament weigh-in for Lake Couchiching. I couldn't believe the size of the fish that anglers were bringing to the scales. I was envious and told my friend that one day I would love to get into tournament fishing. In addition to my love for fishing, I always craved the competition that sports offered.  Bass tournament fishing seemed like the perfect opportunity to satisfy both of these obsessions. In pursuit of this goal, I decided to join the Simcoe chapter of the Canadian Bass Anglers Federation. In the club, I was fortunate to meet some great people and spend time on the water with some very talented bass anglers. Eventually, I returned to compete in the same tournament that I had witnessed as a spectator in the park a couple of years earlier. Only this time, I would take home a cheque and a trophy for first place.

Who are your biggest influences in the fishing industry?

On the Canadian scene, I have a great deal of respect for guys like Bob Izumi and Derek Strub. Derek is a wealth of knowledge and dominates smallmouth on big water. Bob Izumi has experienced unprecedented success while competing on bass circuits for decades. In Canada, he has pretty much reached legendary status. On the American bass fishing scene, I consider Mike Iaconelli quite influential. He's very talented and his passion for bass fishing is absolutely contagious. I think that the common thread here is that all of these guys care deeply about the sport and are quick to share their knowledge and experience with others.

What tournaments series do you fish and what placements have you had?

In the past, I've fished the FLW Canada, Bassmania, and the Top Bass series. Some highlights include:


Any memorable moments while fishing?

There are so many memorable moments on the water that it's difficult to choose. These moments are what fishing is all about.  Once I was fishing a tournament on Lake Eugenia and it was a really slow day. We had five fish in the box totaling 8 pounds. At this point, it looked like there wasn't the slightest chance that we would cash a cheque. We had about ten minutes left to fish before we had to head to the weigh in. My line jumped, I set the hook and culled one of our fish with a 4 pounder. To make a long story short - in ten action packed minutes, we culled every fish we had. We headed back to the weigh-in with only one minute to spare. In the end, we had the biggest bag and placed first in the tournament. It was fantastic that we won the tournament, but more importantly, this experience helped me develop a different mind-set on the water. I began to feel much more confident and I developed the belief that, with perseverance and determination, your day can do a complete 360 in a matter of minutes.
Other memorable moments include: catching my first 5 pounder on Rice Lake, catching my first 6 pounder in the Kawartha’s and receiving my first cheque on stage.

How has The Rod Glove helped you on and off the water?

Several years ago I was fishing a tournament on Lake Erie. We had very little time to get to the weigh in. We put our rods in the rod locker and strapped some of them to the deck. The weather was bad and we had to battle three footers on our way back. Needless to say, the ride back was an absolute gong show. When we arrived, the rods, reels, line, and lures in our boat were in a chaotic state. It looked like a bomb had gone off in our boat. Three rod tips had broken and our rods were in such a mess that we had to cut line off of them and re-tie every one of them. A couple of days later, I heard about the Rod Glove – and realized that this was the ideal solution to avoid what had happened to us on Lake Erie. The Rod Glove helps keep my boat organized and saves me valuable time on the water. It’s also a great way to protect my investment. Every once in a while I sell my rods.  The rod Glove keeps them in mint shape and increases their resale value. I also appreciate the fact that there and many colour options. This helps to me to easily identify my rods and organize them based on technique.

What are your plans for the 2017 season?

In 2017, I’m excited to team up with Richard Hough again to compete in the Bassmania Western Tour.

Hopefully, we will get another chance to compete in the Classic. I'm also looking forward to fishing FLW Quinte with Colin Hunter.

The ultimate goal is to fish in the championship on Tri-lakes with a shot at moving on to compete in the U.S. We will also be competing in the Thousand Island Open for the first time. This tournament offers some stiff competition and promises to be exciting. In August, I will be heading to the 2017 Hank Gibson Qualifier in Petawawa with the hope of making Team Ontario.