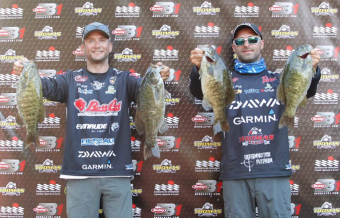 With conditions so rough that there were tournament delays for days, many of the Berkley B1 tournament anglers were put to the stress this season as they battled for points.

The Rod Glove and X Zone Pro Staff, Scott Nagy fought through tough conditions this season and with his partner Denny Andrade they were able to secure a 2nd place overall finish for Team of the Year.

Scott's fishing career started with him fishing when he was younger with his father but his passion for bass fishing did not happen until he was older and attending University.

Wanting to step outside his comfort zone, Scott decided to move and attend Keiser University in Fort Lauderdale, Florida to study business administration.  After meeting a friend at school, the two guys went shopping at Sports Authority and purchased some rod, reel combos and some baits.  They decided to fish at a local golf club and dodged golf balls while pulling out 5 and 6 lb largemouth bass out of the course pond.

The excitement became an obsession for Scott and upon returning home to Montreal Canada, he decided to join the Pro-Bass Canada tournament series.  After spending time at a local bait and tackle store, he met his tournament partner and they became partners.  Success was on his side and many times they took to stage before his partner retired from tournament angling.  He then met his partner Denny Andrade and they have fished together competing in all of the Berkley B1 events.

This year Berkley B1 was showcased in 2 new events in Ontario with one in Trenton along with Port Colborne.  Being situated on big water, the events were both tough to fish as the wind and waves were a constant battle for the anglers.

Scott had a great season and caught 44.19 lbs landing him and Denny to a 5th place finish on Lake St. Francis and 2nd place for the Top Team of the Year.

Scott's has BIG plans for the 2018 season and he will focus on the events that are bigger.  He is looking forward to fishing another season with the Berkley B1 and the Renegade Bass Thousand Island Open.