Have you ever wanted to fish with the Rod Glove's Elite Randy Howell? 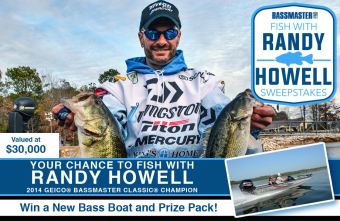 Many anglers are in tune with competitive bass fishing and everyone seems to have their own favorite angler.  The thought of being able to get on a boat with one of these Professional Elite angler's would drive anyone's adrenaline.  Just to be able to learn for a day, some new fishing techniques would be a dream come true for many.

Fish with The Rod Glove's Randy Howell Sweepstakes, by Bassmaster is allowing one individual to not only win a day fishing with this Pro Angler, but also win a bass boat and prize pack.

If you want to get to know a bit more about The Rod Glove Pro Angler Randy Howell, champion of the 2014 Bassmaster Classic, be sure to tune into his "couch talk" that he does after every day on the tournament trail on his Facebook page along with his wife Robin.  Together they recap the day both good and bad and reflect on how to make changes and improvements.

Randy is a down to earth guy that has a strong Christian faith and his strong convictions have led him to be a great angler both on and off the water.  He goes into detail on which type of lure he is working and how it performed to catch his fish.  Honesty is his integrity and he shares his 21 years of knowledge with his viewers in hopes that it may help someone find the fish.  Spend a day with Rod Glove's Randy Howell and check out how he uses the Rod Gloves on his Triton during a day of fishing and then take home your own Rod Glove products.

Bassmaster's has teamed up with Randy Howell to bring the Randy Howell Sweepstakes and until July 31, 2018 you could have a chance to win the following:

One winner will receive ALL OF THESE PRIZES:
Trip for one person to fish with Randy Howell at a to-be-determined U.S. location

Written by Shelley Langley, the opinions and expressions are that of the author's