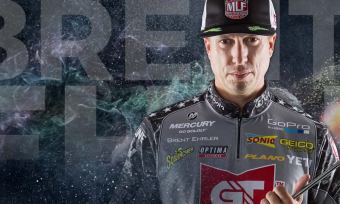 Having had consistent success throughout his career, Rod Glove Pro Brent Ehrler’s ability to mix tournament victories and building the “Ehrler brand” has been nothing short of a success.  Through his calm, cool and collected attitude towards the sport, natural ability to fish and his style and likability, top the list of reasons why this new wave of young anglers look up to him.

With an impressive list of victories in the past decade plus as a professional, it wasn’t always glits and glam for Ehrler, as he had to grind through the low points just like the rest of us and it wasn’t until Lucky Craft came through for him in 2004, which ultimately gave him his big break.

We hear anglers talk about their “support system” and how important it is to them.  Interestingly enough, the day before Ehrler left for the EverStart Champtionship in 2004, he proposed to his then girl friend, which must of given him that little extra boost, as he rode cloud 9 all the way to a Championship victory.

Ehrler’s first year of the Tour was 2005, but as he puts it “I didn’t know which way was up”.  Coming off the EverStart Championship and into his first year Pro, it was a difficult year for him and he didn’t qualify for the Cup that year.  Moving into 2006, Ehrler wasn’t about to give up.  He had a year under his belt and was starting to learn the ropes of professional fishing at the Tour level.  “I didn’t win any events in 2006, but I did well enough in the old NCAA bracket format that FLW used to have and ultimately I ended up winning the cup.”

If you go down the list of FLW pros that have been fishing professionally for 15 – 20 years, but haven’t won the Cup and some a Tour event, it’s shocking to think that Ehrler won it the first year he qualified.  “To be honest, I wasn’t expecting to win,” says Ehrler.  “I just wanted to make sure I fished hard and finished respectably, but I won.  I always wondered why I won.  Almost like I didn’t pay my dues yet and it was so early in my career, but I won and it changed my life.”

Having been so successful early in his career, you have to wonder how anyone would top such a victory.  It’s like winning the Super Bowl in your first year as a pro.  Any human being would wonder if they have already reached the peak of their career and how they would handle to pressure of staying on top.  “After my FLW Tour Championship win in 2006, I put a lot of pressure on myself to continue to do well.  I wanted to be known as being consistent and not just a flash in the pan.”

If you look at Ehrler’s tournament finishes in 2007 and 2008, you would think that he just fell off the map, but he felt it was a matter of time and he was still learning.  “Winning so early in my career, I knew I had a ton to learn about the sport and for a couple years following the 2006 Championship, I didn’t do terribly, but I was still figuring things out.  I was doing well on local lakes in the west and lakes that I knew, but it was the national stuff I was having trouble with.”

Fast forward to 2009; Ehrler pulls out his first big win since 2006 and follows up in 2010 with two FLW Tour victories, a first place finish in a National Guard event, another Tour event win on Lake Hartwell in 2012, along with numerous top 10 finishes along the way.  With the help of long time friend and agent, Tom Leogrande, his wife and the birth of his son, Ehrler’s life and responsibilities was pushed to full throttle, but it only increased his drive to fish harder than ever before.

Brent has amassed over $2 Million in career earnings, nine career wins and a Forest Wood Cup title in 2006. Brent's first year efforts on the Bassmaster Elite Series earned him Rookie of the Year honors and a spot in the 2016 Bassmaster Classic. 2015 also saw Brent crowned as the champion of the Toyota Texas Bass Classic held on the storied Lake Fork in Texas.

If questions ever swirled around about how Ehrler would stay on top after winning the Tour Championship so early in his career, I think we are safe to say that those questions have been answered.