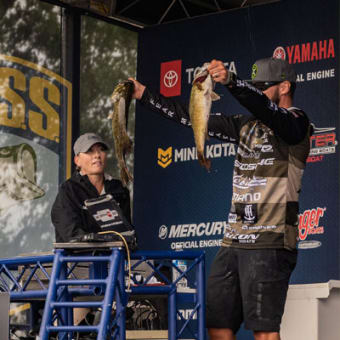 Looking back on the 2021 Bassmaster Elite Series season, my biggest takeaway is I’m continuing to grow as an angler. I’m getting better each and every year. Every element of this job is important, but the most relevant areas are fishing techniques and the mental aspects this sports requires.

This season, I learned new techniques at a few different events and honed some others that needed a little bit of work. The biggest change was I installed Humminbird Live on my boat. This generated a huge change to my whole approach.

I got the system toward the end of the season, and in my first event with this technology — Lake Champlain — I was sitting in sixth place after Day 1 and finished the event in 15th.

Humminbird Live has allowed me to be more efficient. I am watching the way fish react in real time in front of the boat when they don’t know I'm there. You can see how they’re responding to your bait, how you’re working it and where the fish are repositioning.

There’s no guesswork anymore. Between Humminbird Live and Humminbird 360, I can see everything and always know what’s going on. This has sped up my learning curve for everything from the way the bait runs, to the way it sits, when to kill it, when to hop it up, etc. So, this technology has allowed me to learn more about the bait and the fish.

On the mental side, I’ve always been pretty good at managing the stress of my career path. But this season I had the added pressure of potentially being relegated out of the Elites again. When I got relegated after the 2016 season, I had a lot of pressure on me. I didn’t want it to happen, and I could tell I tried way too had when I fished that season.

This year, I enjoyed each and every moment of where I was, and I wasn’t really worried about getting kicked out. If I did, I did; it didn’t matter. I knew I would be fine because I’ve been through that experience already.

I feel like I handled that pressure better, and I saved my season because if I had one more bad event, I was out.

Champlain was the turning point, for sure. I went into that tournament knowing that the last two events were where it was all going to matter, and I finished 15th. That was huge because I knew I would be safe.

I was in ninth going into Day 3, but the way Champlain fishes, you need to catch them every day. You can’t expect to have a mediocre performance and stay in that top half. You’re going to drop to the bottom if you don’t catch them.

That was the day I knew I had grown as an angler in every aspect of my game, and that put me in position to continue my career with Bassmaster.

I thought getting kicked out of the Elites in 2016 was going to be the worst thing in the world. I had a tremendous amount of pressure on me, like my whole career could be over. But that didn’t happen, and as I look back, I see that I just worked through it and everything was fine.

I came back a better angler, and then I won in the first year that I was back. I looked back and realized I put myself through so much pressure and stress in those moments, so I’m a lot more inclined now to believe I’m where I’m supposed to be.

I’m going to do everything in my strength and power to be the best, and however it falls, it falls. Just a little bit of the pressure we put on ourselves can have a huge effect.

So, going into 2022, rather than feeling nerves or being anxious, I will feel excitement more than anything.